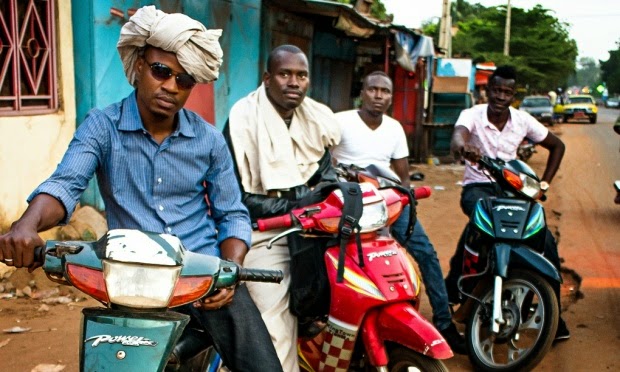 In common with many of their compatriots, the members of Songhoy Blues found the imposition of Sharia law which followed the arrival of Islamist fundamentalist fighters in their hometowns in Northern Mali in 2012, required them to make some fairly urgent and radical decisions about their lives and their music. Garba Touré was advised that there would be dire consequences if he was caught again in public with his guitar. Singer Aliou Touré and bassist Oumar Touré grew up in Gao, a historic trading city on the Niger River, which was selected by the main Touareg rebel movement as the capital of gtheir new and independent state.

None of the three needed a weatherman to tell them which way the wind was blowing and wasted no time in heading south to Bamako, where the decision was taken to play music together, partly to offer a little entertainment to other refugees from the north, and partly as an act of defiance against the imposition of the culturally suppressive and frankly ludicrous ideas that music was sinful and had no place in Mali. To quote Garba, “The world without music? It would be a prison, right?”

Enlisting the services of local drummer Nathanaël Dembélé, himself no stranger to the violence that was already rife in Mali, they threw themselves into Bamako nightlife, playing marathon sets every night: “four hours, ten til two, no breaks”. The band’s break came in September 2013 when, prompted by local studio owner Barou Diallo, Aliou cold-called producer Marc-Antoine Moreau, who was in Bamako scouting for musicians to appear on a compilation album for Damon Albarn’s Africa Express project. An audition followed and the band soon found themselves teamed up with Nick Zinner (Yeah Yeah Yeahs) as producer. They recorded the song ‘Soubour’, which ended up as opening track on the 2013 album, Maison des Jeunes, ahead of a number of international gigs. The collaboration with Nick has continued through the recording of their debut album, Music In Exile, which has been released this week.

That first song, ‘Soubour’, is an angular, bluesy groove which gets the album off to a flying start, its polyrhythmic percussion and fiery lead guitar burning with an intensity that echoes its lyric, which translates as a request to refugees from the conflict in the north of Mali to have patience. As Garba explains, “Without patience, nothing is possible”. The chanted vocals of ‘Irganda’ (meaning “our environment”) are interwoven with a hypnotic guitar riff and driven by an irresistible rhythm but, again, this is music which isn’t just for dancing: its lyric is a plea for a greater understanding of the ways in which we are all contributors to climate change and it’s therefore down to all of us to find solutions before it’s too late.

‘Al Hassidi Terei’, the A-side of the first single from the album, is an uptempo shuffle with a call-and-response vocal; it radiates a shimmering heat like an overdriven valve amp, while the accompanying video is a dizzying (and I use the word advisedly!) celebration of the dance which never fails to make me smile. The jittery guitar riffing of ‘Sekou Oumarou’ calls to mind early John Lee Hooker – no surprise when you remember that Malian music had perfected the blues before there even *was* a blues. As the sleeve notes point out, “when Ali or Garba talk about the blues or rock’n’roll, they’re talking about long lost cousins who’ve come back home” and the deceptively lazy, offbeat bass and crisp fingerclicks and handclaps make for one of the album’s highlights at the same time as they remind us of the common roots of all music. Similarly, the electric desert blues of ‘Nick’ welcomes the spirits of Howlin’ Wolf and Muddy Waters back from their 1930s Chicago home in fine style. This is rhythm’n’blues as oldies like me understand it: a solid, dance-your-socks-off groove with no five-octave coloratura soprano vocal range required.

‘Ai Tchere Bele’ is an almost dangerously fast slab of funk, encircled by spindly guitar and powered by a fractiously intricate interplay between the drums and the bass, a brief drop in the middle allowing the vocals centre-stage for a moment before the band returns in a swirling rope of sound to its turn-on-a-sixpence ending. There’s a more stereotypically desert blues to be found in the downtempo ‘Wayei’ although the setting makes a great showcase for Songhoy Blues’ part-time and only female member Poupée’s vocal interplay with Ali, while driving metallic percussion and a wiry riff make space in the trance-y groove for some fluid lead guitar. It’s followed by the acoustic ballad ‘Petit Metier’, a pretty, introspective interlude with Ali’s vocal gymnastics set against Garba’s simple, strummed guitar. The song builds gradually, introducing some emotive ensemble singing over lightly skittering percussion and a spoken-word rap brings it to a satisfying conclusion.

Reverbed clicks and a spiralling riff underpin ‘Jolie’, a stately and measured blues that gathers momentum as the percussion fills out and more voices enter. Heavily treated guitars reflect the vocal harmonies back into the mix before coalescing into precise powerchords behind Poupée’s high and clear voice, which appears like the last rays of the sun through the evening clouds. The major key ‘Desert Melodie’ finds Ali calling for ethnic harmony in the north of Mali over a complex, swaying rhythm filled out with ambient chirps and tweets against a gentle call-and-response vocal arrangement to make an unexpected highlight. The album closes with ‘Mali’, the B-side of ‘Al Hassidi Terei’ and a thoughtful acoustic blues with a heartfelt lyric about belief in one nation, beyond cynicism and hate.

Listening to that last song, it’s interesting to consider – given the immense range of musical styles and sounds that have come out of Mali in recent years – how constant the lyrical theme of unification is; but perhaps this is simply a natural and entirely understandable reaction to seeing one’s homeland ravaged by war and conflict for years on end. What does come across quite strikingly when listening to the album as a whole, is its range, its power – and the sheer love of music which these four young men clearly have. By turns energetic and joyous, tranquil and reflective, Music in Exile looks set to be one of the most well-balanced and optimistic records you’re likely to hear this year.

This northern Malian quartet first began attracting attention when a song they wrote with Nick Zinner of the Yeah Yeah Yeah’s appeared on one of Damon Albarn’s Africa Express compilations in 2013. The hard-rocking desert blues of Soubour (co-written with Zinner) proved an infectious blend of loping, looping Malian melody and gruffer American riffs inspired by John Lee Hooker and Jimi Hendrix.

The band (from the Songhoy ethnic group) formed when Islamic extremists banned music in their home town of Timbuktu and they fled to the Malian capital of Bamako. You can hear both the exile’s homesick yearning and the musician’s rebellion in the 11 songs that appear on their debut album.
Produced by Zinner and featuring backing vocals from Albarn, this is 40 minutes of energetic Africa-blues-rock boiled down from the weekly, four-hour sets they play in a tiny club outside the city.
Apparently this club has a seating area, although I can’t imagine anybody remaining seated for terrifically danceable numbers such as Irganda (about global warming) or Nick (which borrows a little of its rolling bassline from Canned Heat’s On the Road Again). They do owe a musical debt to Ali Farka Toure (whose songs they started out covering), but they’re definitely etching out their own groove.


When it first gathered recognition outside its roots in Sahara ten or so years ago, Desert Blues provided a tantalisingly alien yet somehow strangely familiar take on the 12-bar business that pretty much any modern music worth listening to has dipped at least its little toe in. For reference, imagine John Lee Hooker’s most intense single-chord boogie vamps slowed down to fit surroundings where water and shade are scarce, with deeply melancholy but defiant lyrics steeped in decades of rebellion, unrest and dislocation.

The style's most renowned practitioners have continued to make great records ever since, but deep adherence to traditional song forms has imbued the proceedings with an unavoidable air of predictability. Until now. Thanks to Tinariwen and Tamikrest, Desert Blues is closely linked with the nomadic Tuareg people. However, Songhoy Blues - who first gained international renown when they opened Africa Express album Maison Des Jeunes - belong to the Malian, once powerful but now marginalised Songhoy ethnic group, which explains the first part of the band's name. The Blues, meanwhile, isn't just a summary of the quartet's musical templates, but also shorthand for their tragic backstory. The four-piece's story is linked to the rise of the Islamist militias, whose reign of terror in the northern parts of Mali forced some members of the band into exile in capital Bamako, where circumstances are tense but at least musicians won't risk having their hands chopped off for plying their trade. This is where the band’s current line-up came together.

Music in Exile manages to turn such a sad starting point into some seriously jubilant sounds. The album is as deeply steeped in traditions as you'd expect from a band with a direct link to no less a deity of Malian music than Ali Farka Toure (guitarist Garba Toure's dad Omar Toure used to be the late, legendary guitarist's percussionist). By injecting the ancient song forms with the cranked-up spirit of the past masters of the electric Blues and some of the rock flash of Jimi Hendrix, however, Songhoy Blues create a distinctly modern and youthful take on the familiar Desert Blues template; equally hypnotic, but infused with the hectic hustle of the city rather than the solemn contemplation and slow paces befitting an endless ocean of burning sand.

Some might credit the energy and emphasis on the groove to producer Nick Zinner (of Yeah Yeah Yeahs) but, apart from a few spots of atmospheric multi-layering and co-authoring the sizzling opener “Soubour”, which combines a call for patience amongst people dislocated by violent unrest with some of the most vibrant, life-affirming sounds you could possibly imagine, with guitar riffs sharp enough to stand in for razors, his presence is barely discernible; the vast majority of Music In Exile features the sparse but richly nuanced sound of a supremely well-oiled band with one foot in ancient traditions and the other firmly in the here and now doing their intoxicating live thing in a room whilst a recorder's switched on.

At its frequent best - most notably the nimble bounce of the indescribably funky “Irganda” - Music In Exile makes you think of a band sufficiently in tune with the hipper end of contemporary music to be inspired by the acts who've drawn influence from the traditions Songhoy Blues are so closely linked to; whether that's actually the case or not, the outcomes remind you of Blues' roots as party and dance music, sounds to drown your sorrows to. Were it not for the translated lyric sheet, you'd be hard-pressed to guess that these songs address the hardships of the exiled, such is the overwhelming joy of the performances.

All of which makes the more reflective moments towards the album all the more affecting. In contrast to the high spirits of, say, the steady-rolling “Nick” (distant relative of Canned Heat’s “On The Road Again”), the closing stages of the album venture nearer to the old ways, with the hushed pair of “Desert Melodie” and “Mali” speaking volumes about the dislocation and homesickness that lurk at the heart of this remarkable, intoxicating record. 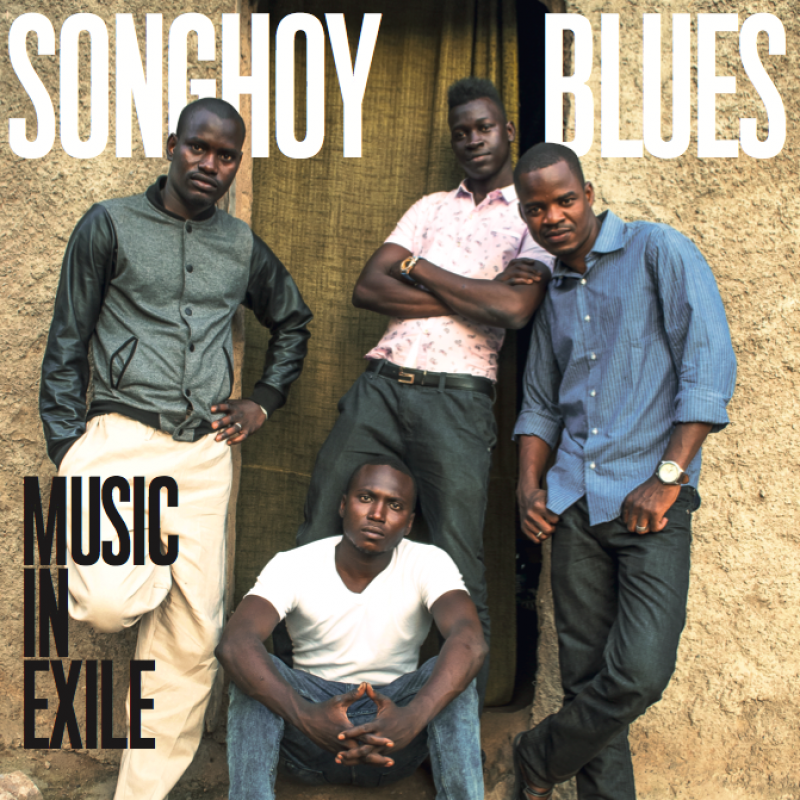